As some of you know, back in 2015 I started my own WIFFLE ball website (www.wiffleballtournaments.com). On the site, I track/list tournaments from around the country and even the world. This makes it easier for fellow players to find/sign up for them. So, for the past four years, I’ve been aware of the Kat Hall Classic. I mainly remembered it because it was semi local and one I figured Way Too Beautiful (my team since 2007) would eventually play in. Fast forward to September 1, 2019 and we finally had the weekend free. 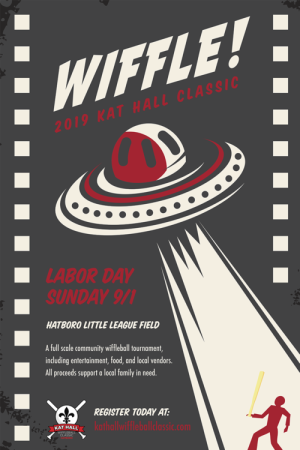 I sent an email to see if there were any spots left… there was ONE. We got it! I quickly sent a text out to the team. Erick, Mike, Connor, and myself would be the squad we’d roll with.

We showed up the day of the tournament and the baseball/softball complex was PACKED. This, at first glance, seemed to be one of the biggest tournaments we’ve attended. We wandered over to registration where they told us we would be on field 10 (out of 12). We went and set up shop by the field. After some quick math, we figured out there were 60 teams in attendance! 60 teams!? This was definitely the biggest tournament we’ve been to. The closest one to it, is the Sea Isle Wiffle Classic (our favorite tournament/weekend of the year) and they cap at 55 teams.

They called all the teams together to go over rules and then performed the National Anthem.

Play ball! In the round robin, there were five teams at each field and you had to play each team once. We made it through round robin going 4-0, which guaranteed us a playoff spot! Mike pitched the morning games and crushed it. He only let up one run in all four games.

We even had a few special guest fans show up. Erick’s mom and dad, otherwise know as Aunt Terri and Uncle Kevin. The other special guest was none other than… 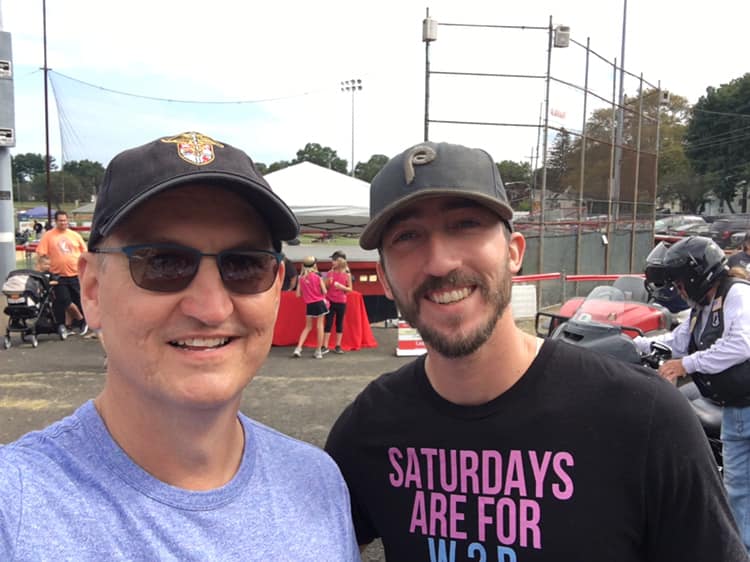 John Hill! My good friend from the National EMS Memorial Bike Ride. John only lives a few miles from the sports complex and saw on Facebook that we were there playing, so he decided to stop by. All three “fans” were great. They would stay and cheer us on until the very end.

While we were waiting for playoffs to start, Connor, Erick, and myself decided we would enter into the home run derby. It was only $5 and it was going to charity, so why not. Connor hit eight, which tied him for first and sent him into a swing off. Erick and myself hit somewhere around five or six so we were just helping out the charity. Connor, otherwise know as Soup, went to the swing off where we quickly realized he was facing an eight year old. Yikes. Connor would only hit two home runs in the swing off, but the little kid couldn’t hit any. Soup won!

Now, it was playoff time. Connor would pitch through the playoffs, especially since we found out there was no limit to pitch speed. He’s easily the best fast pitcher we had. The first game of playoffs was the craziest. Connor was matching speeds with the other team and gave up an early home run. We were losing 2-0 in the bottom of the 4th with two outs (the games were only five innings long). Mike stepped up to the plate with one guy on first. BOOM! He hit an absolute laser beam over the fence to tie the game and would also get the walk off single in extras to win us the game. Mike was officially on fire.

The next game would also go into extra innings and Erick would draw a walk off walk. The semi final game was a bit of a blow out. I believe we won 11-0. Now time for the championship. If you wish to, you can see most of the game here:

This was the first legit fast pitch game we had to play. Both teams were throwing absolute fire. Connor gave up a first inning single and then locked it down. We honestly weren’t worried about the Chicken Wifflers getting any runs. It was just a matter of, when would we. Again, it would be another extra inning game and in extra innings both teams start with the bases loaded. It was a pitcher’s duel until the bottom of the 8th inning. I stepped up to the plate with one out and bases loaded.

Buh bye! I still don’t think the ball landed. I hit the ball and didn’t even watch it land. I knew it was gone, so I turned to celebrate with my team. What an amazing win. Way Too Beautiful has a bad history with finishing second… so solidifying the win and in that way was perfect. After we shook hands, it was time for the award ceremony.

On top of the trophies, we took home a ton of other stuff. There were gift cards to local restaurants, a Burger King gift card, two tickets to a Phillies game (Erick and his dad would go), umbrellas, bottle openers, gym bags, and even cleaning supplies. We would end up using that Burger King gift card as soon as we left the fields. It was our victory dinner. 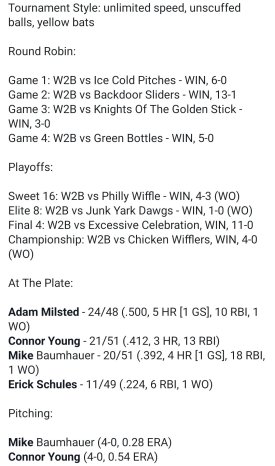 Another championship for W2B. That’s number 16 in our long career. When/where will we get number 17? Hopefully it’ll be in Galloway Township on October 5th for the AC Outlaws Wiffle Brawl Tournament! It’ll be myself, Ian, Connor, and Erick competing in that one. Will we bring home another ship? Stay tuned!! 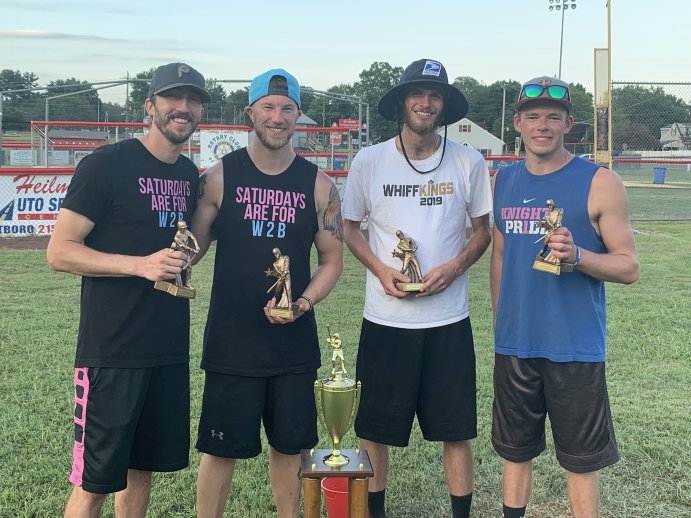 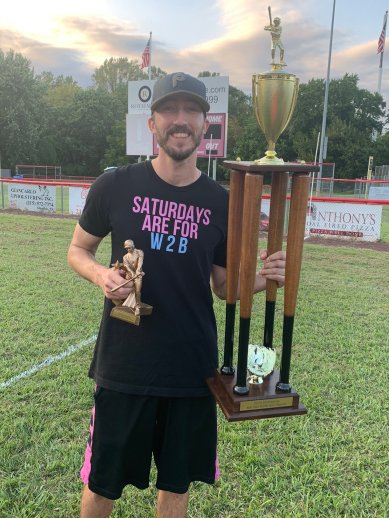