This whole thing started coming to fruition when Vini’s band, In The Presence Of Wolves, announced their upcoming full length US tour. Leen and I talked about trying to surprise Vini and the band at their show in Los Angeles, but as the date got closer, it just wasn’t working out. One, it was too expensive and two, it was in the middle of the week. Once LA was out of the question, I started checking the other dates/locations. That’s when I noticed Nashville. It not only was on a Friday, but I found round trip tickets with Frontier Airlines for $97!! How could we pass this up? A $97 round trip flight is almost unheard of. Here was the catch:

The first flight was Friday, May 10th. We would land at 7PM and Vini’s show was at 8PM, so we would literally have to run right there. Then, we would fly home the following day (May 11th) at 1:40PM. This means we would be in Nashville for roughly 18 hours. At first, Leen was on board, but naturally I didn’t book the tickets right away and the next day they doubled in price. After this, Leen thought about it for a couple more days and decided it would be too crazy of a trip for her, plus her cousin, Trish, was moving May 11th and she wanted to be home to help her move.

Fast forward to Tuesday, May 6th. Less than a week before the show. I hopped back onto my new favorite travel app, Skyscanner. The tickets had dropped back down to $97, so I immediately booked it! Leen and her dad both wanted to join, but unfortunately they just couldn’t swing it this time… I would be flying solo.

The trip was booked, but what was I going to do about a hotel? I was only going to need a room for a few hours and all the hotels in Nashville were double to triple the price of my flight. I did a quick Google search and found a place called Cafe Coco. It was a 24/7 coffee shop. This is where I would post up for the night!

Now what would I do about a bag? I thought about bringing a carry on bag, but the venue (Exit/In) wouldn’t allow bags and Frontier made you pay $35 for a carry on. I was going to be there less than 24 hours so I decided not to bring a bag. I would get changed at work before getting dropped off at the airport and would leave my work clothes in my grandpop’s car (honestly the time we were in Copenhagen was even crazier of a clothes/bag situation because of the weather being over 90 degrees, but you’ll hear more about that in an upcoming post). This is the lightest I ever packed for a trip and to be honest, it was quite nice. I did always feel like I was forgetting something, but not having to worry about anything was beautiful.

(Besides the clothes on my back, this is all I brought with me: EMS Memorial Bike Ride challenge coin, cell phone charger, wallet, headphones, and my cell phone)

The flight there was super easy and barely an inconvenience. We had landed about ten minutes later than we were supposed to so this was going to be a photo finish making it to the show on time. In hindsight, the stewardess asked for five volunteers to move to the front of the plane. My guess is they had to even out the weight, but anyway, I wasn’t paying attention when they asked so I missed my opportunity. Not only would this have made the couple sitting next to me happy to get a row to themselves, but it would’ve also helped me get off the plane quicker.

I got dropped off at exactly 8PM and I could hear Vini starting up the show as I walked in. I was beyond excited to see the reaction when they spotted me. I walked up to the very front and tried getting his attention for a couple songs, but had no luck. That’s when I moved off to the side a bit. Right under a light and no one near me. By the end of the third song, it happened.

It’s kind of hard to see in the video, but Vini spots me and you can see him mouth, “OH MY GOD!” with a huge grin on his face. It was classic. About another song or two later he made sure the band saw me out there and said, “By the way, did you guys see FUCKING Adam is here!?” and then made the crowd cheer. Really wish I had caught that on video, but oh well.

After the show, I met them at the merch table. I thought they killed it. They however weren’t as happy with the sound, but I heard multiple people tell them they were great while buying ITPOW merchandise. From what Vini was saying, they’ve been selling a TON of merchandise on tour, which is fantastic! They’ve sold so much, they’ve had to order in more stuff. Hopefully this is going to lead to bigger and better things.

We went backstage and hung out until the other two bands were done their shows. We caught up on how tour was going and I told them how this crazy plan came together. Vini said if Leen had shown up with me, he probably would’ve cried.

When the concert was over, it was clean up time. I helped clean up and then we strolled over to Nashville Underground to grab a beer, plus the band was hoping they would run into one of their favorite bartenders. Nashville Underground was a PARTY! We only stayed for a beer, but this is definitely a place I can see myself going back to.

If you know about my wiffle ball team, Way Too Beautiful, then you’ll know why I have the above video. Anyway, the band was going to drop me off at Cafe Coco, which by the way, I totally forgot to mention, was right next to the concert venue! They were headed off to Atlanta (roughly a four hour drive) so Vini figured he would grab a coffee when they dropped me off. We said our byes and in a couple more days they’ll be in Ardmore, PA so I’ll be seeing them again soon!

Cafe Coco would be my home for the next five hours. I got there around 2AM and would eventually leave around 7AM. Not going to lie, from 3AM – 5AM was a STRUGGLE! I was really regretting not getting a room, but I powered through with the help of coffee and Netflix. I made sure, multiple times, with the workers that they were okay with me hanging out and all of them told me it was cool. When the sun started coming up I decided I needed to start walking/venturing around or I was going to pass out. So around 7AM I started walking. I walked to the Parthenon (an art museum that is a replica of the structure in Greece), I stopped to check out the Vanderbilt football field, and then walked all the way down Broadway to the main drag, stopping every so often to snag pictures of places we went for Brian’s bachelor party a few years ago (like our hotel and Hattie B’s). My dad would be proud. I also found a few Munzees on the walk. If you don’t know Munzee, check it out. Its a cool virtual scavenger hunt. You find the Munzee (a QR code) and scan it with your phone. 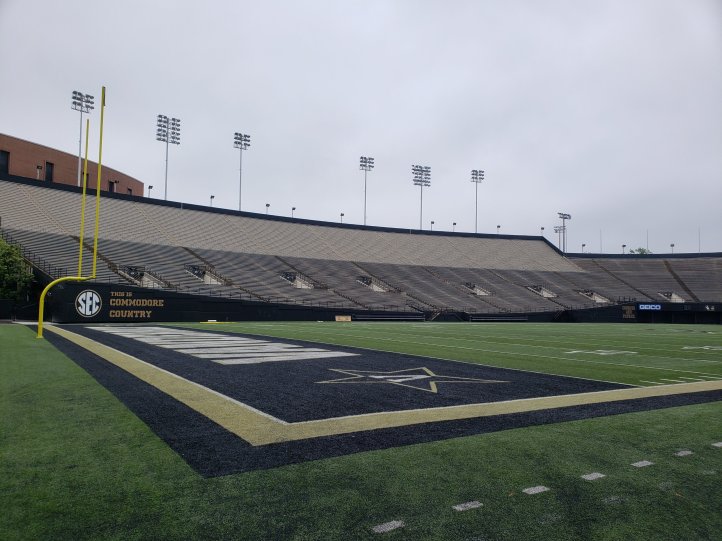 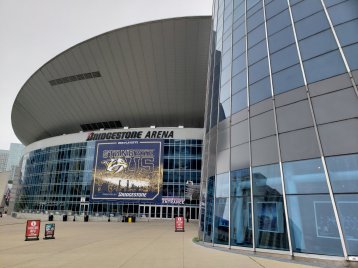 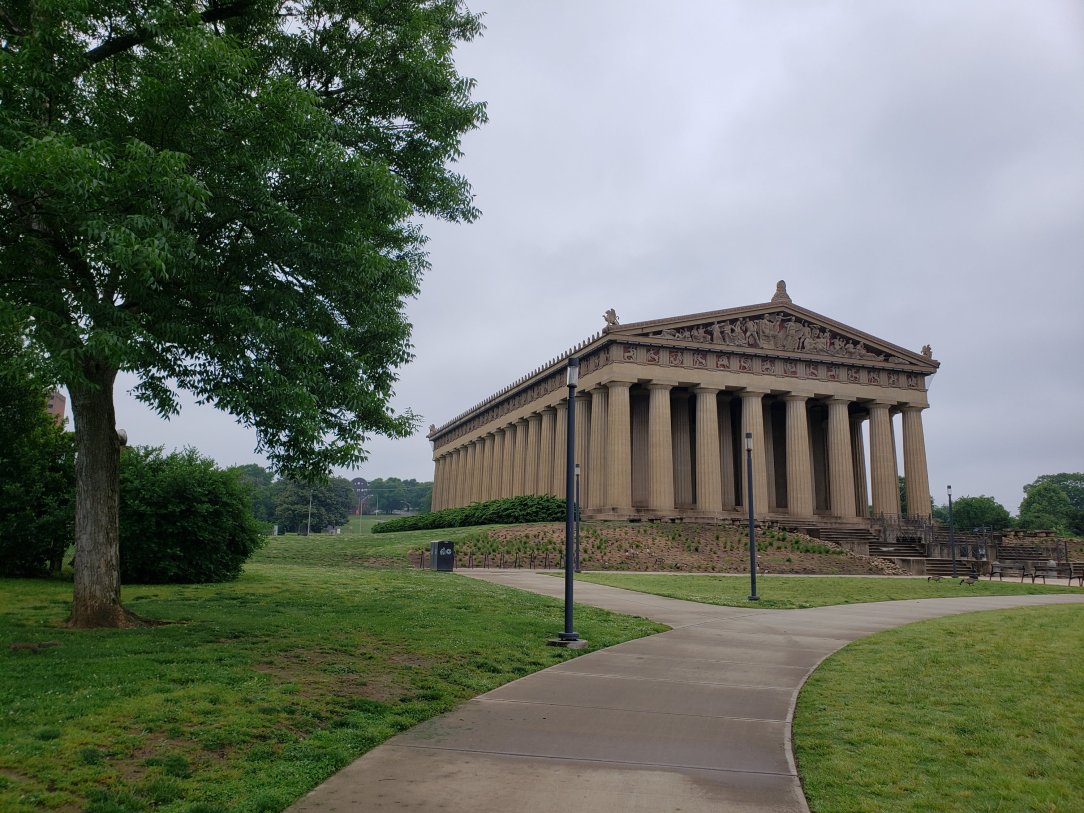 I finally made it downtown and a couple of the bars started to open. I stopped into Tootsie’s, since a few people had told me to go. I didn’t realize until I stopped in that we had gone there for Brian’s bachelor party, but I stayed anyway. Pop-Pop Bowe always said how much he had loved Nashville so I decided I would get a Crown Royal on the rocks for him and be on my way.

It was about time to head back to the airport. I ordered my Uber. The driver told me I was crazy when I mentioned I had walked from the Parthenon to downtown. It didn’t seem far when I was walking, but I looked at my phone later and turned out I had walked roughly six miles. Wow!

I can honestly say I was so tired I don’t even remember the plane taking off. I passed out for an hour or so, only to wake up when the captain said, “We are now in our final decent.” I was officially ready for a shower and my couch! What an EPIC adventure though! This was right up my alley. I loved every second of it (except maybe 3AM – 5AM). Absolutely can’t wait until the next spontaneous adventure because we all know this certainly won’t be the last! 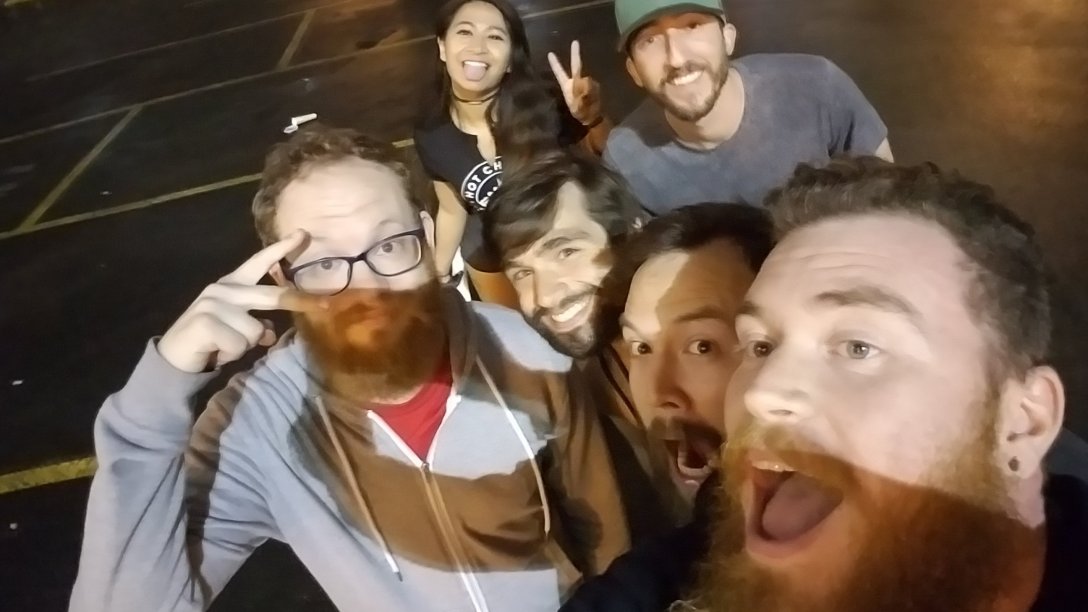