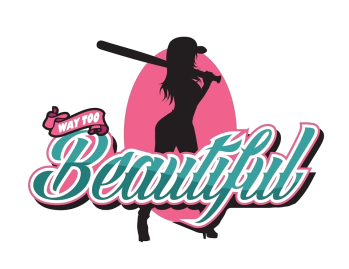 As most of you know, one of my biggest hobbies (outside of traveling) is wiffle ball. I’ve been playing pretty much forever, but myself, Ian Crosby, Mike Baumhauer, & Brett Poulton started, the now world famous, Way Too Beautiful. Yes, I know it sounds crazy, but its legit. Across all of our social media platforms (Facebook, Twitter, Instagram, & YouTube) we have 1,800+ followers spanning across the country and even the world. Including countries like Canada, France, Italy, Japan, Argentina, and just recently, Guatemala. We started the team back in 2007 and since then have brought on Kenny Sturman.

Most people don’t know the origin of our name, Way Too Beautiful, but it’s a pretty good one. Back in 2007, we had signed up for a tournament in Philadelphia known as Wiffle Up! In previous tournaments we had gone with the lame name of “Heights Baseball.” Well, we were finally ready to come up with a better name. When we were sitting on Packer Avenue waiting for Wiffle Up! to start, we still hadn’t created a name. Finally, one of us said, “Ok, the next song that comes on is what our team name is gunna be.” Sure enough, the next song was Beautiful Girls by Sean Kingston.

Quite literally, the first line of the radio version is: “You’re way too beautiful girl, that’s why it’ll never work.” Well, guess what… the girl may not have worked out, but the team name sure did!

Over the years, we’ve won 13 championships and we’ve played in at least 7 different states. Including Las Vegas, NV and Savannah, GA. Vegas and Georgia weren’t all of the W2B guys, however. Those were just Crosby and myself. We went to Vegas back in 2011 for the Golden Stick Wiffle National Championship and ended up placing 2nd in the country (which is funny because now we claim to be the “best 2nd place team in the world”). The following video is from a game in that National Championship. We ended up defeating the 3 time reigning champions, a team we weren’t projected to beat. In the video, I hit the go ahead home run in the final game of the series.

That was easily one of my favorite wiffle ball memories, besides the plane ride out… which was pretty brutal. It ended up being a 28 hour trip due to delays and an extended stay at the Denver airport, where we got so bored we made a human bicycle.

The tournament in Savannah was another great trip. Myself and Crosby jumped onto a team at the last minute for the Golden Stick Fast Pitch Open and car pooled down in a van with 10 other players. Again, we weren’t favored to do well in the tournament and again we proved everyone wrong. We ended up making it to the top 8 and lost a 1 run game to 603 All Stars, who were one of the favorites. In the last game of the night, that Saturday, we had to win. In the following video (at the 30 second mark) you’ll see the end of the game. We were playing a team from Pittsburgh, PA. The game went into extra innings when, finally, I hit a walk off double to get us to the top 8 teams the following day. #LetsGoSunday!

We usually play anywhere from 5-15 tournaments a year. So far in 2018, we’ve played in 2 and have at least 2 more lined up, but always end up jumping into a handful more throughout the summer and fall. There is a league in York, PA called Mid Atlantic Wiffle Ball League. We attended their opening tournament and since then, a team called the York Yaks, has signed me to play with them the rest of the year (The W2B guys are more of a medium pitch team and the MAW is fast pitch league, so they all were ok with me signing with the Yaks for the 2018 season). Here’s a couple clips from my first two appearances with the Yaks.

Throughout the time of Way Too Beautiful, we have made it into local news stories and national articles/viral videos about wiffle ball. This past year has been one of the better ones for W2B, publicity-wise. We’ve been lucky enough to not only have one local paper write an article about us, but two! The Retrospect (a local paper out of Collingswood, NJ) wrote this article last year: 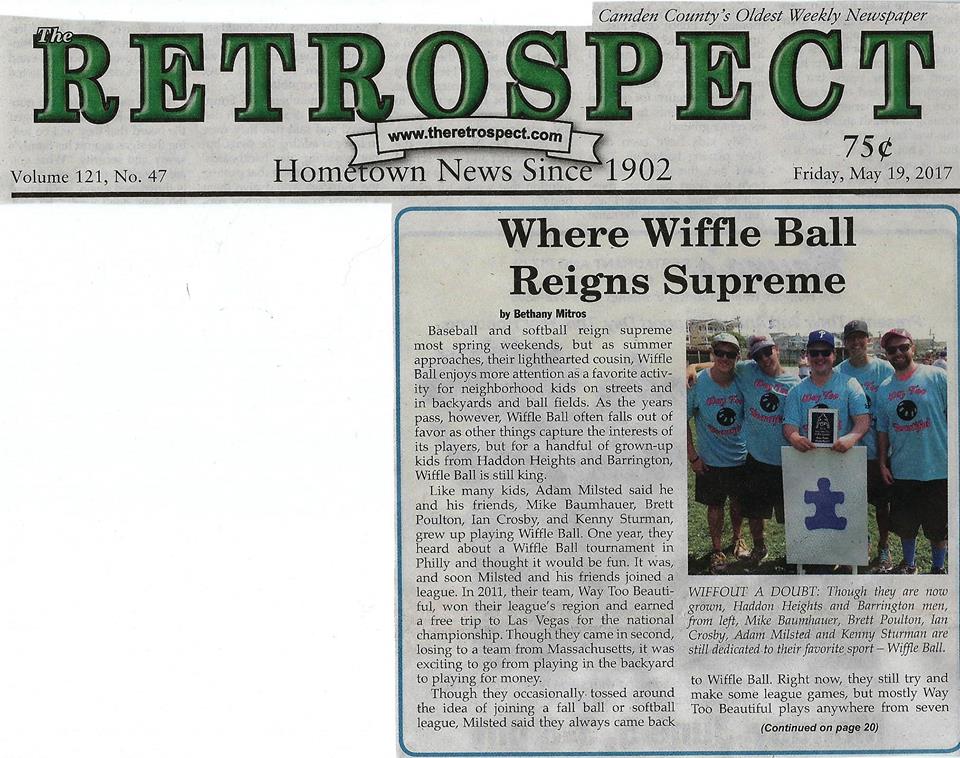 Then, just in the past week, the Barrington Borough News (a local paper out of Barrington, NJ) published this article: 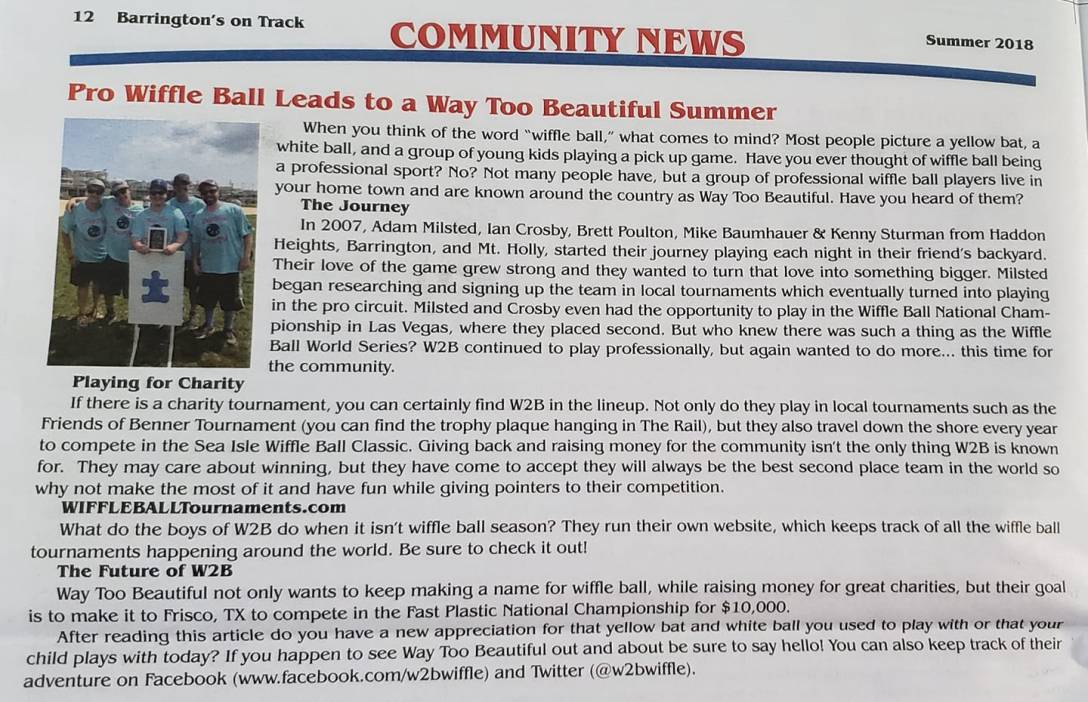 If you noticed, both articles talk about a website www.WIFFLEBallTournaments.com.

I created this site back in 2015, when I was vacationing in Ocean City, NJ. It was something I had been meaning to do for a while and finally went for it (and if you notice in the logo, I gave W2B a hidden shout out with the color coordination). Crosby and I used to keep track of local tournaments we wanted to potentially sign up for. We kept track on a Microsoft Word document, but I wanted it to be more organized and start tracking not only local tournaments, but tournaments across the country. In the first year I had the site going, it had 1,200 views. The second year is when it took off… 30,000 views! I couldn’t believe it. The site is now one of the most popular ones in the wiffle ball world. Players from all over the country check in, to find tournaments. Tournament directors even reach out to me weekly to have their tournaments listed on the site. I was even able to bring on sponsors such as Moonshot Bats, Mid Atlantic Wiffle, Fast Plastic, Wiffle Fall Classic, and within the last couple weeks BacKstop and PWR Supplements. I still can’t believe how this thing has taken off. I was just doing it for our own benefit of tracking tournaments in an easier manor, but I couldn’t be happier that it’s now helping the sport grow. Over the last few months I’ve even been appearing on Fast Plastic’s Wroc TheRock radio show every Wednesday to discuss upcoming tournaments around the country. You can usually hear me on in the first 5 minutes of the show. Here’s one of the past shows for your enjoyment (in this particular one, you can hear me around the 13:52 mark):

This year Fast Plastic is hosting their national championship in Frisco, TX and the grand prize is $10,000. You better believe I’m trying to leave my schedule open for that weekend! Until then, you can find me in York, PA for MAW tournaments July 14th & September 8th, Sandy Hook, NJ for the Chriszilla tournament on July 21st, and Sea Isle City, NJ on August 11th for the Sea Isle Wiffle Classic. And who knows, maybe Crosby and I will find a tournament or team to play when we venture over to Italy in a month. Ya just never know… but as always, have a WAY TOO BEAUTIFUL summer!

Trumansburg, NY & 1 year anniversaries 💕
Busy weekend in South Philly!
Heard this guy lost his 50s... guess he'll be out there for a while trying to find them!
Sup, Dex?
Goodbye for now, Austin!
Avocado turned 7 yesterday... 👀🤯🥑
Loading Comments...
%d bloggers like this: